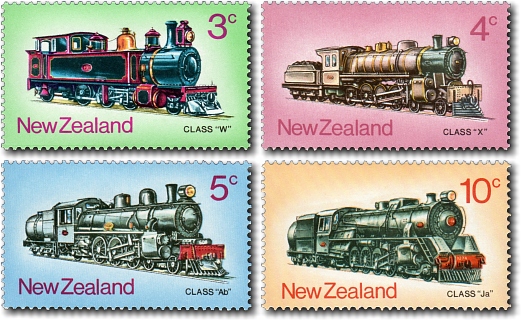 This stamp issue features four New Zealand steam locomotives. The last steam locos had been withdrawn from service in 1971.

The 3 cent stamp features a "W" Class Tank Locomotive, the first engine built in the New Zealand Railways Workshops in 1889.

The 4 cent stamp has an "X" Class Locomotive which were among the first four cylinder compound locomotives built in the world.

The 5 cent stamp features "Passchendale", an "Ab" Class Locomotive named "in memory of those members of the New Zealand Railways who fell in the Great War".

The Ab 'Pacifics' were the most successful and versatile locomotives run on New Zealand railways. 141 were built between 1915 and 1926.

Passchendaele (AB 608) was built at the Addington Workshops in Christchurch, and featured at the New Zealand and South Seas Exhibition in Dunedin in the summer of 1925-26. It pulled the Duke and Duchess of Yorkâ€™s royal train in 1927 and the Prince of Wales in 1920.

By the time it was withdrawn from service in 1967, it had steamed more than 2.4 million kilometres.

The 10 cent stamp features Ja 1274, the last steam locomotive built by New Zealand Railways in Dunedin. The locomotive spent most of its working life based in Dunedin, and was gifted to the city when it was withdrawn. The locomotive is housed in a glass shelter outside the Otago Early Settlers Museum.

The Postage Stamps of New Zealand Volume VI
Edited by D. E. G. Naish FRPSNZ and K. J. McNaught FRPSNZ FRPSL
Publsihed 1975 by The Royal Philatelic Society of New Zealand Incorporated
Pages 187 - 188
If you have any questions or comments please contact us - we'd love to hear from you.