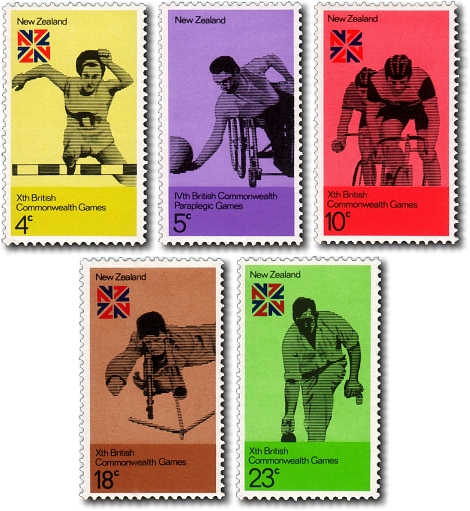 The Commonwealth Games were held from January 24 to February 2. Following the massacre of Israeli athletes at the 1972 Munich Olympics, the Commonwealth Games in Christchurch was the first multi-sport event that placed the safety of participants and spectators above all else. Security guards surrounded the athlete's village - which are now halls of residence on the University of Canterbury campus - and there was an exceptionally high-profile police presence. Despite the precautions, the games went without hitch and were called "the friendly games".

The Postage Stamps of New Zealand Volume VI
Edited by D. E. G. Naish FRPSNZ and K. J. McNaught FRPSNZ FRPSL
Publsihed 1975 by The Royal Philatelic Society of New Zealand Incorporated
Pages 190 - 191
If you have any questions or comments please contact us - we'd love to hear from you.