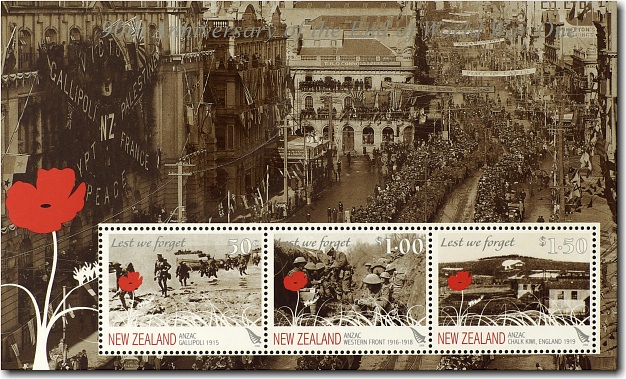 New Zealand Post issued a special miniature sheet to commemorate the 90th anniversary of the cessation of World War I hostilities on the Western Front. This miniature sheet features stamps from the 2008 The ANZAC Series: Stories of Nationhood issue.

The armistice treaty between the Allies and Germany was signed in a railway carriage in Compiegne Forest on the 11th of November 1918, and marked the end of the First World War on the Western Front. Principal signatories were Marshal Ferdinand Foch, the Allied Commander-in-chief, and Matthias Erzberger, Germany's representative. The Armistice was agreed at 5am to come into effect at 11am - the "eleventh hour of the eleventh day of the eleventh month".

While this official date to mark the end of the war reflects the cease fire on the Western Front, hostilities continued in other regions, especially across the former Russian Empire and in parts of the old Ottoman Empire.