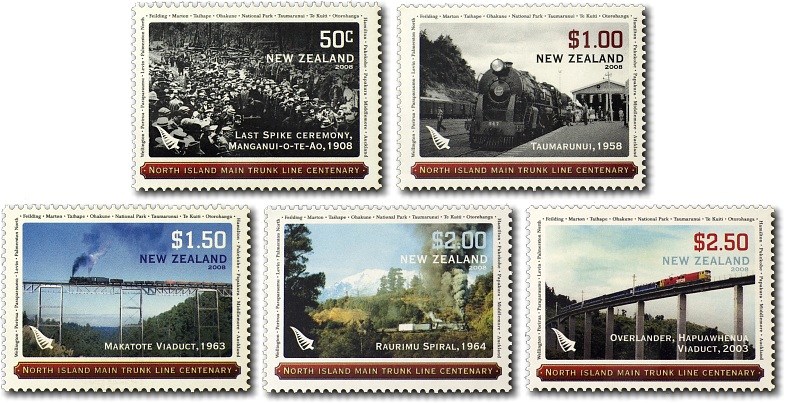 This issue commemorates the 100th anniversary of the completion of the North Island Main Trunk line which connects Auckland and Wellington. The 681 kilometer line was completed in 1908 after 23 years of construction work.

On the 7th of August 1908 the first passenger train, the 11-car Parliamentary Special carried Prime Minister Sir Joseph Ward and other parliamentarians north from Wellington to see the American Great White Fleet at Auckland. However, the track was barely complete with some cuttings having vertical batters and some unballasted sections of track. Prime Minister Ward drove the last spike on the 6th of November 1908. The 'Last Spike' monument is at Manganui-o-te-Ao near Pokaka.

A two-day service commenced on the 9th of November 1908, with an overnight stop at Ohakune. On the 14th of February 1909, the first express left Auckland for Wellington for an overnight trip scheduled to take 19 hours 15 minutes - with a sleeping car, day cars with reclining seats and postal / parcel vans. The dining car left on the north-bound express from Wellington to Ohakune and then transferred to the south-bound express to avoid the heavy gradients of the central section.

Some of the greatest engineering achievements include the famous Raurimu Spiral (described as an 'engineering miracle') which allows trains to manage the steep grade from the Whanganui River valley onto the Volcanic Plateau. Nine major viaducts were constructed - five of which are over 70 meters high. The rail link was an economic lifeline for the North Island and opened up the centre of the North Island for European settlement and investment. It heralded the golden age of rail transport within New Zealand and established Auckland and Wellington as the country's leading cities.

The 50 cent stamp features a photograph of the 'Last Spike' ceremony on the 6th of November 1908. Prime Minister Sir Joseph Ward hammered the 'last spike' into a railway sleeper just north of the Manganui-o-te-Ao Viaduct.

The $1 stamp features the 50th anniversary display at Taumarunui Railway Station in November 1958. The locomotive KA 947 was constructed in August 1939 and like all other locomotives in the Ka class became a mainstay of the North Island Trunk line although they were also used on other routes in the North Island. Interestingly, KA 949 (constructed in October 1939) was wrecked in the Tangiwai disaster on the 24th of December 1953 - New Zealand's worst rail disaster. With the commencement of main line dieselisation in 1954, the Ka class was slowly displaced from service on the Main Trunk Line.

The $2 stamp shows another Ka class locomotive pulling a goods train through the Raurimu Spiral - a 6.8 kilometer single-track railway spiral which overcomes a 132 meter height difference over an effective travelled distance of 2 kilometers. Designed in 1898 by R. W. Holmes, the line loops back upon itself and spirals around with the aid of tunnels and bridges, rising at a gradient of 1 in 52. At one point, trains cross over the longer of the two tunnels through which they have just passed.

The $2.50 stamps show the 'Overlander' crossing the 414 meter Hapuawhenua bridge in 2003. This bridge was built in 1987 when the track was electrified and is part of a 10 kilometer deviation from the original line. The original 284 meter Hapuawhenua Viaduct is now part of the adjoining national park and is not pictured. The Overlander is a long-distance rail passenger train between Auckland and Wellington along the North Island Main Trunk and was called one of the best-value scenic rail trips in the world by the British Guardian. The Overlander is being pulled by an EF class 25 kV AC electric locomotive. The EF class are the only mainline electric locomotives in service on the New Zealand national rail network. The 3,000 kilowatt (4,000 hp) locomotives are the most powerful locomotives to operate in New Zealand, and their design has influenced the design of other electric locomotives overseas - including the Le Shuttle Eurotunnel Class 9 electric locomotives that operate in the Channel Tunnel between the UK and France.
If you have any questions or comments please contact us - we'd love to hear from you.
Catalogue · 2007 · 2008 · 2009
Order Form · Currency Converter
Privacy Policy · What to Expect
Contact Us · Links