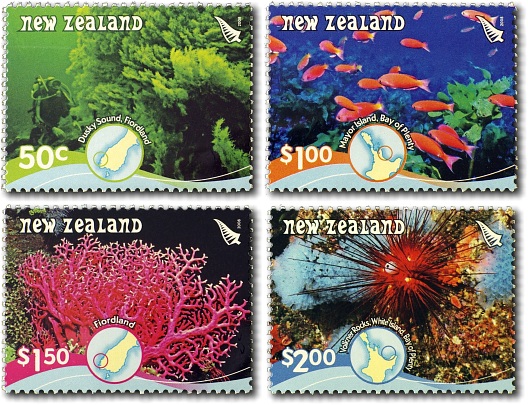 The 2008 Scenic stamp issue featured New Zealand Coral Reefs photographed by Dr Kim Westerskov. Kim Westerskov is a photographer and writer who specialises in images of aquatic and seashore life. He has a Ph.D. in Marine Sciences from Otago University, and has written and illustrated seventeen books about the seas, sea-life, and Antarctica.

The 50 cent stamp features Black Coral Trees from Dusky Sound in Fiordland. This coral is usually found near offshore islands at depths greater than 45 metres. However, the coral grows at a depth of around 4 to 5 metres in Dusky and Doubtful Sounds due to the unique aquatic conditions. The top few meters is fresh water, fed from high inflows from the surrounding mountains, and stained brown with tannins from the forest. Below this is a layer of cold, heavy, saline water from the sea. The dark tannins in the fresh water layer make it difficult for light to penetrate. Thus, many deep-sea species grow in the comparatively shallow depths of the Sound.

The one dollar stamp features a school of Splendid Perch (Callanthias Australis) swimming over common kelp (Ecklonia radiata) around Tuhua (Mayor Island) - a dormant shield volcano located off the Bay of Plenty coast of the North Island. The area of the Bay of Plenty around the island is renowned for game fishing, however, the island and the waters close to its shores are now a small marine reserve while the island itself is a wildlife refuge.

The 50 cent and $1 stamps were also issued as self-adhesives.

The $1.50 stamp features red hydrocoral (Errina novaezelandiae) which is one of two protected marine invertebrate species found in Fiordland. Stylasterid or hydrocorals are typically a deep water family but the unique aquatic conditions described previously allow these species to grow at depths accessible to divers. Errina novaezelandiae is polymorphic with separate feeding and defensive polyps.

The two dollar stamp features Diadema palmeri - a sea urchin of the Diadematidae family. The diadema urchin has very sharp spines for defence and is active at night, hiding in crevices or under rocks. Te Paepae o Aotea (also known as the Volkner Rocks after Carl Sylvius VÃ¶lkner) are a group of andesitic rock stacks and pinnacles located 5 kilometres north-west of Whakaari / White Island in the Bay of Plenty. A marine reserve was established in 2006 and the area is popular with divers due to good visibility, spectacular scenery and colourful marine life.

The miniature sheet features all four stamps from the set with a photograph taken at Poor Knights Islands - a group of islands off the east coast of Northland, 50 kilometres north-east of Whangarei. The islands' name is said to derive from their resemblance to Poor Knight's Pudding, a bread-based dish popular at the time of discovery by Europeans. The chain consists of two large islands (Tawhiti Rahi and Aorangi) with a group of smaller islets between the two, the largest of which is Motu Kapiti. Tawhiti Rahi is also used as a name for the entire chain. The islands are the eroded remnants of a 4 million year old rhyolitic volcano and are protected as a nature reserve while the waters for 800 metres around the islands are a marine reserve in which it is prohibited to disturb marine life or remove rocks or shells. They are a popular diving location due to the variety of marine fauna.
If you have any questions or comments please contact us - we'd love to hear from you.
Catalogue · 2007 · 2008 · 2009
Order Form · Currency Converter
Privacy Policy · What to Expect
Contact Us · Links