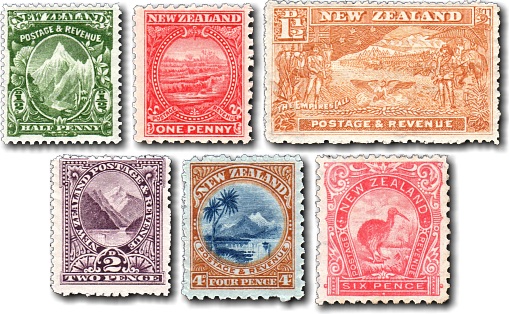 In 1900, a number of the lower value pictorial stamps from the 1898 issue were replaced. The designs and colours of the penny and fourpence stamps were swapped as the two-tone 1898 penny stamp was too difficult and costly to print in large quantities. The stamps were originally intended to be printed this way around in 1898, but a printers error saw them transposed.

The halfpence stamp features Mount Cook, New Zealand's highest mountain printed in green as required by the Universal Postal Union for all halfpenny stamps. Two alpine flowers are featured on the stamp - the Ranunculus and Celmisia. The stamp was also reduced in size so that 240 stamps could be printed per sheet.

The one penny stamp features the White Terraces which were produced by geothermally heated water which left thick white layers of limestone. Located on the edges of Lake Rotomahana near Rotorua, they were considered the eighth wonder of the natural world until they were completely destroyed by the violent volcanic eruption of Mount Tarawera in 1886. The eruption claimed around 150 lives and is the most violent and destructive volcanic eruption in recent history.

The twopence stamp, featuring Pembroke Peak in Milford Sound, was reduced in size so that sheets of 240 stamps could be printed to reduce printing costs for this very commonly used stamp.

The four penny stamp features Lake Taupo with Mount Ruapehu in the background and a Cabbage Tree on the left. Lake Taupo is the largest lake in New Zealand covering over 600 square kilometers. The lake is well known for rainbow trout which were introduced in 1884.

The sixpence stamp featured the Kiwi as in the original 1898 issue, but printed in red because the Universal Postal Union required halfpenny stamps to be printed green.