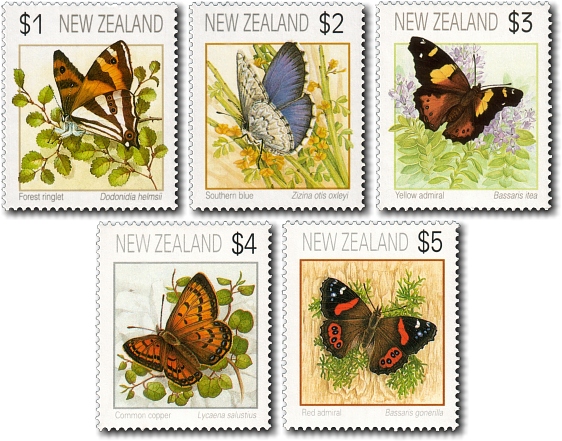 The butterfly definitive stamps were initially printed by Leigh-Mardon Pty Ltd. The House of Questa later reprinted the issue and these stamps may be distinguished by the differing perforations on the top and bottom edges of the stamps although the $1, $2 and $4 stamps also vary in size. The $5 stamp was not issued until January 1995.

The House of Questa stamps are incorrectly listed as being Perf 13¾ x 14 in at least two other highly regarded catalogues when they are in fact 13¾ x 14¼. Volume X of the Postage Stamps of New Zealand (by the Royal Philatelic Society of New Zealand) confirms that 13¾ x 14¼ is in fact correct.

Southern Colour Print produced a trial AirPost booklet with AirPost labels se-tenant to the top of the stamps. The bottom edge of stamps from the booklet are imperforate. Southern Colour Print also reprinted the $4 stamp and these stamps can also be distinguished by differing perforations.

The stamps also appeared on one of the two 1991 Philanippon miniature sheets.
If you have any questions or comments please contact us - we'd love to hear from you.
Catalogue · 1990 · 1991 · 1992
Order Form · Currency Converter
Privacy Policy · What to Expect
Contact Us · Links