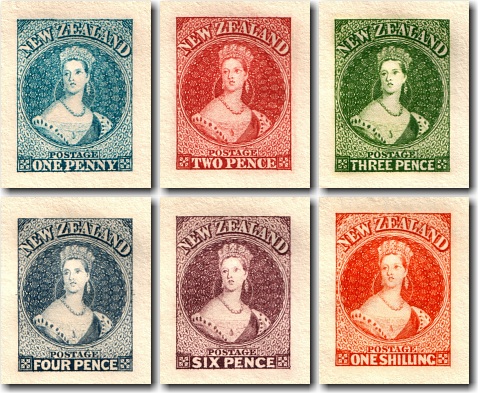 In 1850, New Zealand was a frontier colony with only a small European population. However, in line with other countries and after five years of planning by the New Zealand Government, a system for prepayment of postage on correspondence was introduced with the issue of the first imperforated stamps (prepayment of postage dues was not made compulsory until 1862).

Their design was based on a full face portrait of Queen Victoria in her state robes at the time of her coronation in 1837, by Alfred Edward Chalon. Hence these stamps are often called the "Full Face Queens" or "Chalon Heads".

The issue initially contained only three stamps - the penny, twopence and one shilling stamps. They were designed from a watercolour sketch of the original portrait by Edward Henry Corbould, engraved from this reference by William Humphrys and initially printed in London by Perkins, Bacon & Co. This initial printing along with the plates were then shipped to New Zealand.

The printers did not try to anticipate demand and by 1859 there was still a surplus of the initial shipment of one shilling stamps - so much so that the postmaster in Otago took to cutting the stamps in half to fill the sixpence postage rate. There was, however, substantial demand for the twopence stamp used for mail within New Zealand, and the one penny stamp - a special discounted postage rate for servicemen - is almost always seen used in pairs.

These stamps were first issued around the 18th to 20th of July 1855. All subsequent stamps were printed in New Zealand with the sixpence stamp introduced in 1859 to cover postage to the United Kingdom via Southampton. These were printed from plates engraved in London and shipped to New Zealand.

In 1862, a threepence stamp was introduced for ninepence accelerated postage to the United Kingdom via Marseilles.

From their introduction in 1855, the stamps were hand cut using scissors by Post Office employees at the counter. Around 1862, the stamps started being fed through automatic perforation machines. The perforated varieties are listed separately under 1862 Full Face Queen Victoria - Chalon - Perforated.

The penny and sixpence varieties listed here are the result of printing variations. There are also varieties on different papers which are too specialist for this catalogue. A simplified collection of this issue would include 1a, 1c, 1d, 1e and 1h.

Please Note: The stamps shown above are from the 1950 printings that were published in Volume II of The Postage Stamps of New Zealand by The Royal Philatelic Society of New Zealand. The printings were from the original dies (which were subsequently destroyed) and the image quality is superior to even the best examples of the original stamps which were printed from plates created from the dies. The stamps were printed in authentic but incorrect colours for each denomination to avoid them being confused with legitimate stamps.