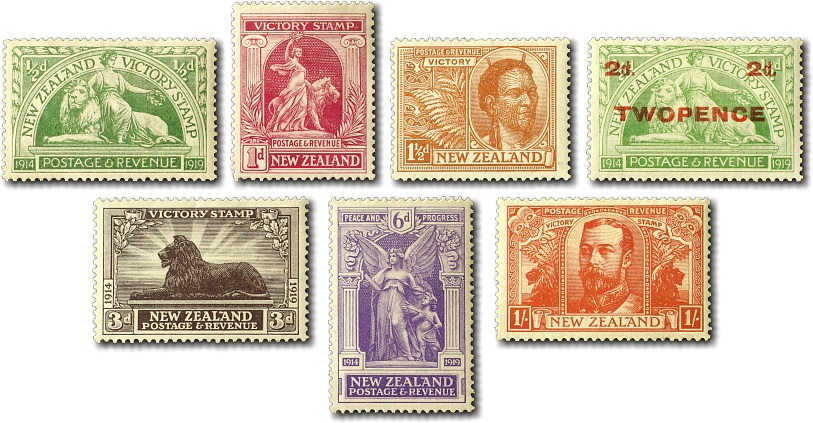 Immediately following the cessation of World War I in November 1918 a request was made to issue a set of stamps commemorating the declaration of peace. The designs were intended to be imperial rather than national with a modest indication of country of origin.

The stamps were designed and manufactured in London, and were available for sale in London three months before the issue was released in New Zealand. Some New Zealand collectors received copies of the stamps from British stamp dealers before the Post Office had released the issue. This caused sufficient commotion that a decision was made to in future not sell issues abroad.

The numbers printed were in the millions and the stamps continued in use as de facto definitives for several years. In 1922, the ½d stamp (which had little use after the postage rate for newspapers was increased to one penny in 1920) was surcharged 'TWOPENCE' in red.

The halfpence green stamp features the British Lion representing the British Empire with the allegorical figure of Peace sitting with him.

The penny red stamp also features the British Lion, this time standing with the allegorical figure of Peace walking beside him.

The 1½d stamp features a Maori Chief wearing the tail feathers of the now extinct Huia and a Whakakai or ear pendant made from shark teeth.

The three penny stamp features the British Lion again - this time one of the lions which flank Nelson's Column in Trafalgar Square, London. Trafalgar Square was very familiar to New Zealand soldiers who fought in the war.

The 6d stamp shows 'Progress' attendant on the angel of Peace. The design alluding to peaceful uses of knowledge and technology rather than the horrific uses inflicted on soldiers in the trenches in the First World War.