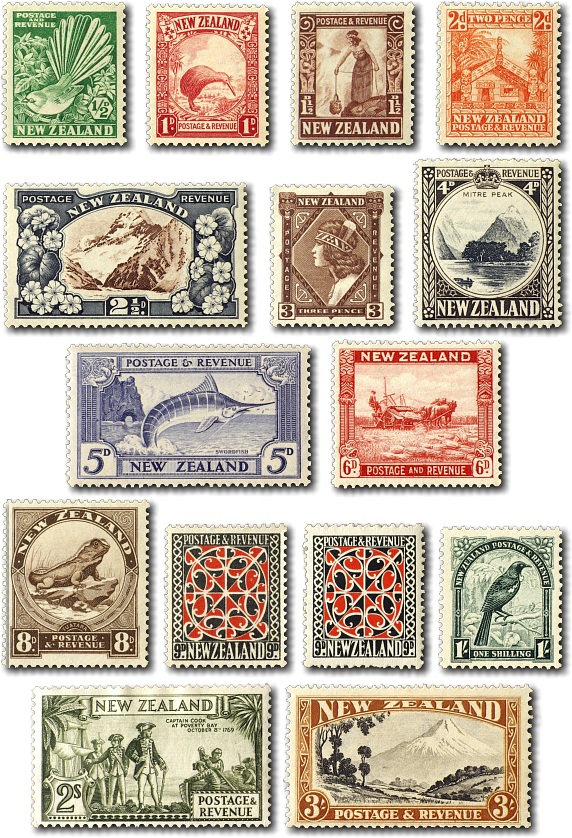 By 1931 several of the plates for the King George V stamps were noticeably worn. Given that the design of the 1926 Admirals issue had been severely criticised, the authorities decided to try the same approach which had worked so well in 1898 - a design competition for a new set of pictorials.

Entries were divided into New Zealand subject groups: fauna, scenery, Maori art, agricultural, history and sport. Over 1,500 entries were received and designs from eleven contributors were included in the final set.

The stamps suffered a series of delays though - printing by photogravure was abandoned in favour of line etching with the exception of the nine penny stamp which was the first New Zealand stamp printed by offset lithography. There were also issues with paper quality and the shilling stamp design was changed before issue.

The 5d stamp features a Striped Marlin or Swordfish with Piercy Island ("The Hole In The Rock"), a famous fishing ground for swordfish on the left.

The eight penny stamp features the native Tuatara - the only surviving member of the Sphenodontians which flourished around 200 million years ago. The name "tuatara" derives from the Maori language meaning "peaks on the back".

The 9d stamp features the ornamentation from a Maori sliding door panel. This stamp was printed using offset lithography rather than recess printed like the rest of the stamps in the issue. The stamp was issued in two main forms. The initial prints from plates first prepared by Waterlow and Sons and subsequently by Coulls Somerville Wilkie with the stamp design measuring 18 by 21½ mm are quite variable in colour from dull red, bright red and brick red with the frame in dull grey, slate grey or black. Later printings from new plates from Coulls Somerville Wilkie have a smaller design measuring 17½ by 20½ mm (with a subsequently larger white border) and are consistently scarlet against a shiny black frame. The stamps are best distinguished by the size of the design as not all of the initial larger design printings have a grey border.

The three shilling stamp shows a pastoral view with Mount Egmont / Mount Taranaki in the background. Mount Taranaki is a dormant stratovolcano on the west coast of the North Island. It is geologically young - volcanic activity commenced around 135,000 years ago.
If you have any questions or comments please contact us - we'd love to hear from you.
Catalogue · 1934 · 1935 · 1936
Order Form · Currency Converter
Privacy Policy · What to Expect
Contact Us · Links