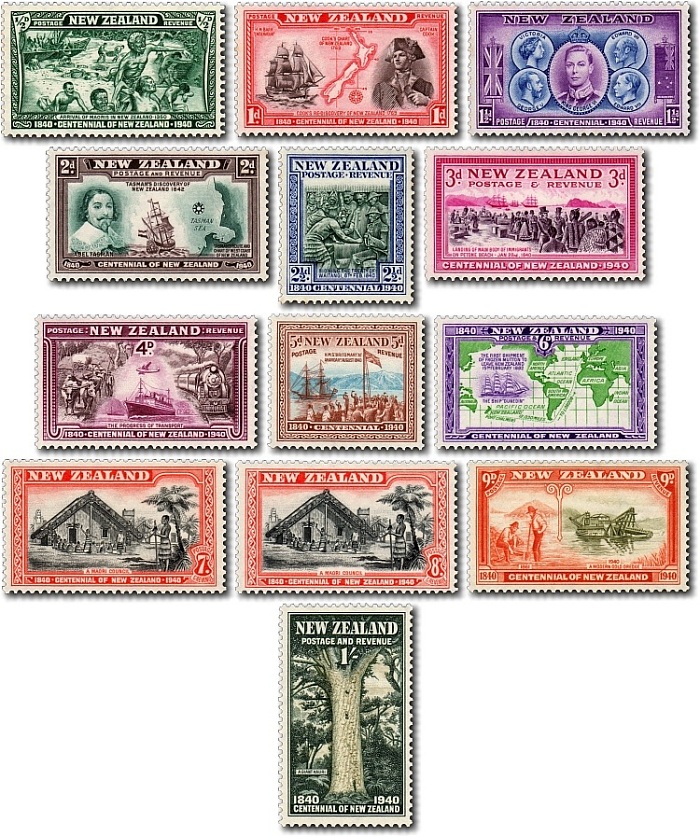 Planning for the commemorative 1940 Centennial of British Sovereignty issue began in 1936. The stamps were designed by James Berry and Leonard Mitchell, both of Wellington and were selected from designs submitted by 19 artists. Most of the stamp designs were dual-colour.

The halfpenny stamp features the designers impression of the arrival of Maori in New Zealand. The stamp shows emaciated and exhausted Maori struggling up the beach after weeks spent battling the oceans and weather in open canoes.

The penny stamp features the Endeavour and Captain Cook with the map of New Zealand that Cook produced after circumnavigating both islands in 1769.

The penny halfpenny Sovereigns stamp features British Royalty at that time - King George VI in the centre with Queen Victoria, King Edward VII, King George V and King Edward VIII. This is the only New Zealand stamp with Edward VIII on as he abdicated from the throne after less than a year as King. The 10d surcharge on this stamp is listed separately under the 1944 Sovereigns Provisional issue.

The twopence stamp features Abel Tasman, the first European to sight the New Zealand coast in 1642. Tasman was unable to land on the rocky west coast, but continued to sail north and then east, where one of his boats was attacked by Maori in waka, and four of his men were killed. The country was subsequently named after the Netherlands province of Neiuw Zeeland, but not being a viable trade partner was not visited again for over a century.

The 2½d stamp features the signing of the Treaty of Waitangi on the 5th of February 1840 by representatives of the British Crown, and various Maori chiefs from the northern North Island. The Treaty established a British governor in New Zealand, recognised Maori ownership of their lands and other properties, and gave Maori the rights of British subjects. After the initial signing at Waitangi, copies of the Treaty were taken around New Zealand and over the following months many other chiefs signed. However, the English and Maori language versions of the Treaty differ significantly, and so there is little consensus to exactly what was agreed to.

The three penny stamp shows European settlers disembarking from their ships and meeting local Maori. The New Zealand Company which was formed in 1839 to promote the colonisation of New Zealand was a profit making organisation that sought to buy land cheaply from the indigenous residents and sell it to speculators and "gentleman settlers" at a much higher sum. Emigrants would provide labour to break in the lands and cater to their employers' everyday needs. They would eventually be able to buy their own land, but high land prices and low rates of pay would ensure they first laboured for many years. The company stridently opposed the Treaty of Waitangi and was frequently criticised by the Colonial office and New Zealand governors for its "trickery" and lies. Settlers often arrived to harsh conditions nothing at all like the elaborate and false advertisements they had seen before departing.

The four penny stamp features land, sea and air transport. The development of New Zealand relied on the establishment of road and railway links across the country. The geographical isolation of New Zealand made it very dependent on sea and later air links with trading partners.

The five penny stamp depicts the assertion of British Sovereignty over the South Island with the hoisting of the British flag at Akaroa on the 11th of August 1840. The area was settled that same year by French settlers who had intended to establish a colony.

The sixpence stamp features the Dunedin's first shipment of frozen mutton for the United Kingdom. In the 1870s, New Zealand exported large amounts of wool, but the wool market was in decline. In the United Kingdom, there was a shortage of meat to feed the expanding population. The Dunedin (1876-82) was the first ship to complete a truly successful transport of refrigerated meat. In its capacity, it helped set the stage for New Zealand's success as a major provider of agricultural exports despite its geographical isolation.

The sevenpence stamp features a traditional Maori Council held in front of the meeting house.

The nine penny stamp features gold mining from the 1860s gold rush and a more modern gold dredge. Gabriel Read's discovery of gold at Gabriel's Gully in 1861 led to the Central Otago gold rush, with the population of the gold field rising from virtually zero to around 11,500 within a year.

The one shilling stamp features "A Giant Kauri", a coniferous tree found north of 38 degrees South in the northern districts of New Zealand's North Island. It is the largest species of tree by volume in the country, standing up to 50m tall above the forest's main canopy.

The eight penny Maori Council stamp replaced the seven penny when parcel rates were increased as a result of the outbreak of war.