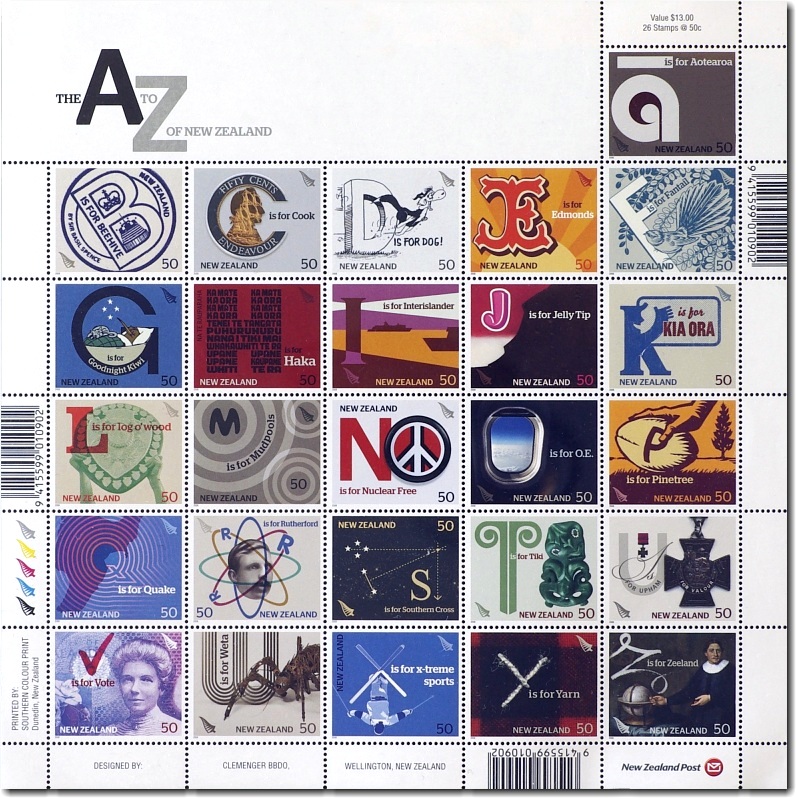 This issue comprises a sheetlet of 26 fifty cent stamps celebrating New Zealand icons and traditions. The stamps were sold individually at some New Zealand Post outlets.

A is for Aotearoa: the most widely known and accepted Maori name for New Zealand.

B is for Beehive: the common name for the Executive Wing of the New Zealand Parliament Buildings.

C is for Cook: James Cook was an English explorer, navigator and cartographer who recorded the first circumnavigation of New Zealand.

E is for Edmonds: The Edmonds Cookbook is the quintessential guide to traditional New Zealand cuisine which is now recognised as a Kiwi icon.

G is for Goodnight Kiwi: a character in an animated short film which played to signal the end of nightly broadcasts on Television New Zealand.

H is for Haka: For over 100 years the All Blacks have had a tradition of performing a haka before games

I is for Interislander: A ferry service across Cook Strait between the North Island and South Island.

J is for Jelly Tip: Very popular icecream first produced in the 1950s.

K is for Kia Ora: a Maori language greeting which has entered New Zealand vocabulary - it means "be well/healthy" and is often used as an informal "hi"

L is for Log o' Wood: The Ranfurly Shield is the most prestigious trophy in New Zealand's domestic rugby union competition.

M is for Mudpools: synonymous with the Geothermal regions of the North Island, particularly around Rotorua.

N is for Nuclear Free: In 1987 a law was passed to "establish a Nuclear Free Zone in New Zealand to promote and encourage an active and effective contribution to the essential process of disarmament and international arms control."

O is for O.E.: an extended overseas working holiday - sometimes referred to as "The big OE" - typically at least one year and often far longer.

P is for Pinetree: Colin Meads nickname - a former New Zealand rugby union footballer who played 55 test matches as an All Black from 1957 to 1971 - named Player of the Century in 1999.

Q is for Quake: New Zealand is on the Pacific Ring of Fire - an area of frequent earthquakes and volcanic eruptions that is home to over 75% of the world's volcanoes.

R is for Rutherford: New Zealand physicist who became known as the father of nuclear physics.

S is for Southern Cross: the constellation appears on New Zealand's flag.

U is for Upham: Captain Charles Upham was a New Zealand soldier who was the only person to earn the Victoria Cross for extreme bravery twice during the Second World War:

V is for Vote: New Zealand was the first major nation to grant universal suffrage to women (however, women were not eligible to stand for parliament until 1919).

W is for Weta: among the largest and heaviest insects in the world. Weta Workshops created many of the special effects for Peter Jackson's Lord of the Rings movies.

X is for x-treme sports: a variety of extreme sports such as bungy jumping are available in New Zealand.

Y is for Yarn: MÄori traditional textiles were woven from a number of plants, including harakeke, wharariki, pingao, kiekie and toetoe.

Z is for Zeeland: The islands of Aotearoa were named Nieuw Zeeland by Dutch navigator Abel Tasman.
Bibliography
If you have any questions or comments please contact us - we'd love to hear from you.
Catalogue · 2007 · 2008 · 2009
Order Form · Currency Converter
Privacy Policy · What to Expect
Contact Us · Links