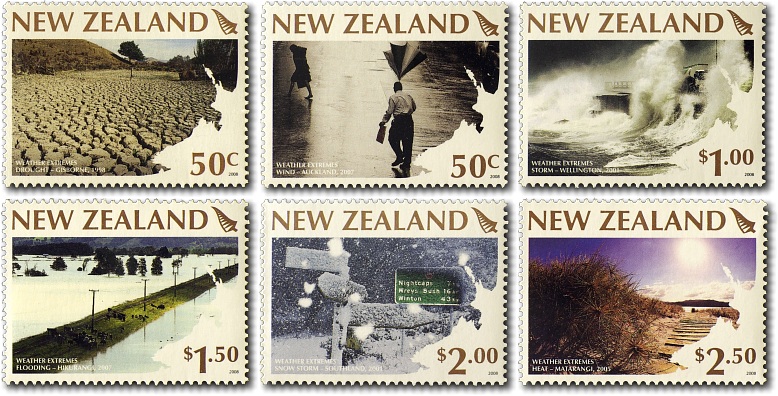 The United Nations General Assembly declared 2008 as the International Year of Planet Earth to increase awareness of the importance of Earth sciences for the achievement of sustainable development. To commemorate the Year of Planet Earth and reflect growing concern over climate change New Zealand Post issued a set of six stamps of extreme weather conditions experienced in New Zealand.

The first 50 cent stamp shows the effects of the 1997 - 1998 El Nino drought. A drought is an extended period with consistently below average precipitation. It can have a substantial impact on the ecosystem and agriculture of the affected region. The United Nations estimates that an area of fertile soil the size of the Ukraine is lost every year because of drought, deforestation, and climate instability.

The second 50 cent stamp shows pedestrians on Auckland's appropriately named Wyndham Street battling a westerley gale in March 2007. New Zealand is hit by a tropical cyclone once every eight to nine years but westerly gales are common in most regions with winds often gusting up to 120 kilometres per hour.

The one dollar stamp shows waves from a tropical cyclone storm surge at Evan's Bay, Wellington in 2001. The worst storms develop when the remnants of tropical cyclones approaching from the north re-intensify as they collide with strong cold fronts approaching from the south. The 'Wahine' storm in 1968 was one such example. Early on the 10th of April, two violent storms merged over Wellington, creating a single extratropical cyclone storm. The winds in Wellington were the strongest ever recorded - at one point they reached a speed of 275 kilometres per hour ripping the roofs off 98 houses in one suburb and blowing three ambulances and a truck onto their sides as they tried to go into the area to bring out injured people. The storm resulted in the capsize and sinking of the 'Wahine' - an 8,944 gross tonnage drive-on passenger ship in Wellington harbour. 53 of the 733 passengers and crew on board died.

The $1.50 stamp shows stock trapped above flood water on farmland at Hikurangi, a Northland settlement in 2007. Over ten thousands homes were without power and isolated by closed roads as torrential rain and wind gusts up to 180 kilometers per hour hit the region.

The two dollar stamp shows a snow storm at Ohai, Southland in May 2001. Snow is common in the south-east of the South Island, with snow falling to near sea level most winters in Southland and around Dunedin.

The $2.50 stamp features extreme heat. The eastern South Island records the hottest summer temperatures, mostly due to North Westerly Foehn winds generated by winds moving over the Southern Alps. A Foehn wind is a dry down slope wind which occurs in the lee of a mountain range. It is a rain shadow wind which results from the subsequent adiabatic warming of dry air which has dropped most of its moisture on the windward slopes. As a consequence of the different adiabatic lapse rates of moist and dry air, the air on the leeward slopes becomes warmer than equivalent elevations on the windward slopes and can raise temperatures by as much as 30 degrees Celcius.

The Postage Stamps of New Zealand Volume X
Edited by B.G. Vincent FRPSNZ
Published 2013 by The Royal Philatelic Society of New Zealand Incorporated (ISBN 978-0-9876534-3-7)
Pages 170 - 171
If you have any questions or comments please contact us - we'd love to hear from you.