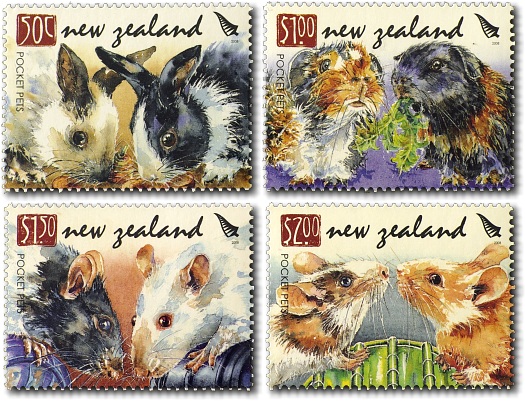 This issue commemorates the Chinese Year of the Rat - one of the 12-year cycle of animals which appear in the Chinese zodiac related to the Chinese calendar. In some parts of the world, it is referred to as the Year of the Mouse and may more broadly be translated to "rodent".

Pocket Pets refer to any small mammal commonly kept as a household pet. The most common pocket pets include hamsters, gerbils, fancy mice or rats and guinea pigs.

The 50 cent stamp features the Netherland Dwarf Seal Point rabbit (on the left) and Dutch Dwarf rabbit (on the right of the stamp). The Netherland and Dutch Dwarf rabbits are popular breeds of domestic rabbit originating from the Netherlands and Holland. Smaller than most rabbit breeds, these rabbits are usually kept as pets or exhibition animals. Their popularity as pets stems from their babyish appearance and smaller cage space requirements compared to larger rabbit breeds.

The $1.50 stamp has a hooded chocolate fancy rat on the left and an albino white rat on the right. The fancy rat is a domesticated chocolate brown rat with hooded markings - meaning that the markings run from a full head down the spine.

The two dollar stamp has two fancy mice, a fawn and white and a cinnamon satin. Satin mice have a high sheen coat which has a satin-like gloss.

The stamps, miniature sheet and first day cover were all designed by Lindy Fisher of Auckland. 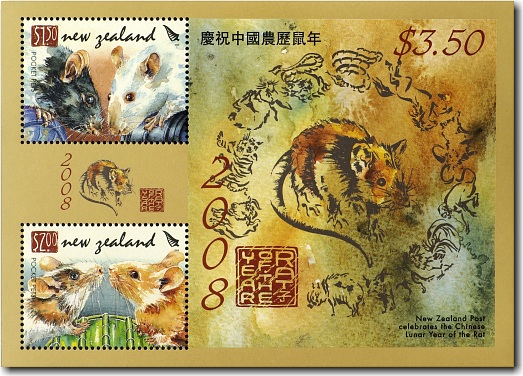 The rat and mouse stamps were also included in the Year of the Rat miniature sheet, and the $1.50 stamp was included in the 2008 Taipei 21st Asian International Stamp Exhibition miniature sheet.
Bibliography
If you have any questions or comments please contact us - we'd love to hear from you.
Catalogue · 2007 · 2008 · 2009 · Chinese Lunar Year
Order Form · Currency Converter
Privacy Policy · What to Expect
Contact Us · Links