Following his death in 1952 it was decided to replace the set as soon as possible with a new Queen Elizabeth II definitive issue. The denominations were similar to the George VI issue but there was no five penny stamp and the 1/3 and 2/- stamps were replaced by a 1/6 stamp. Five and ten shilling stamps were also added.

With the exception of the 1½d stamp which due to a stamp shortage was issued in mid December 1953 to meet the Christmas demand, the rest of the set was issued on March the 1st 1954.

Many complaints were received, especially from elderly people, about how difficult it was to read the figures on the low denomination stamps and in 1955 the designs were altered. 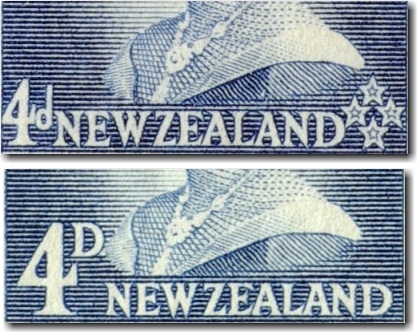 The differences between the two issues are very easy to spot: larger values were added on the left of the stamp; 'New Zealand' was shifted right of centre and the Southern Cross was omitted from the right hand side of the design. The new designs are listed as a separate issue in this catalogue under 1955 Queen Elizabeth II - Larger Figures.

Booklets were issued containing twelve 1d and twelve 3d stamps. The first booklets (92r) issued on the 1st of April 1954 did not contain airmail labels and contained 12 each of the small figure stamps (92b) and (92e).

Booklets issued from September 1955 contained the same stamps plus a sheet of airmail stickers (92r1).

Booklets issued from May 1st 1956 contained the small figure 1d stamps and the 3d stamps with large figures (97d) plus a sheet of airmail stickers (92r2).

Booklets issued from September 5th 1957 contained 1d and 3d stamps both with large figures (97a and 97d) plus a sheet of airmail stickers (92r3).

Booklets issued from June 20th 1959 contained the same large figure stamps plus airmail stickers interleaved with a layer of waxed paper. (92r4).
If you have any questions or comments please contact us - we'd love to hear from you.
Catalogue · 1952 · 1953 · 1954
Order Form · Currency Converter
Privacy Policy · What to Expect
Contact Us · Links