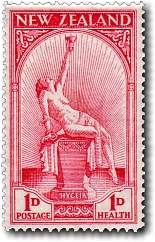 The 1932 Health stamp shows the symbolic figure of Hygieia, the Greek goddess of health, cleanliness and sanitation. While her father, Asclepius, was more directly associated with healing, Hygieia was associated with the prevention of sickness and the continuation of good health (the word 'hygiene' is derived from her name).

Hygieia is often depicted as a young woman feeding a large snake that is wrapped around her body from a jar that she carries. On the stamp, Hygieia is reclining on a pedestal holding a goblet high against the rays of either the rising or setting sun and the serpent is going hungry.

This health stamp was the first to attribute the surcharge to 'health' rather than 'charity' - a more accurate term given that the funds were being used to establish and maintain summer camps for children suffering from malnutrition and low stamina.

The first two sheets printed were presented to the then Governor-General, Lord Bledisloe, on an official visit to the Otaki Health Camp.