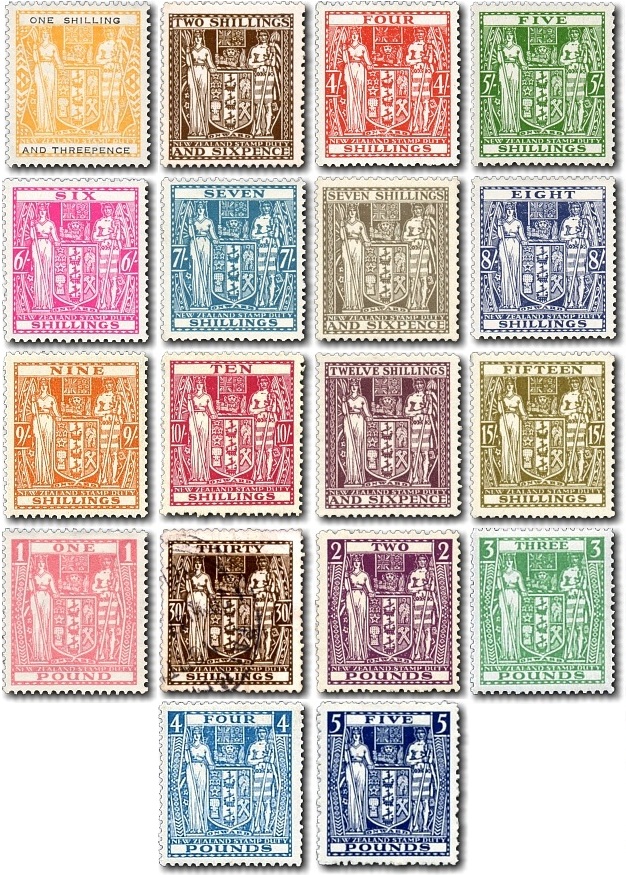 In 1929 Linley Richardson was commissioned to design a new set of fiscal stamps. His design incorporated his own interpretation of the New Zealand Coat of Arms which varied considerably from the version authorised by Royal Warrant and included the New Zealand flag in place of the Union Jack.

In two situations, the Arms stamp design printed in red but without any value in the top and bottom borders was surcharged for use as a provisional postage-only stamp. These stamps are listed separately in this catalogue under 1950 Arms Provisional and 1964 Provisional.

Fiscal stamps were intended primarily for tax gathering by government departments in New Zealand. They were attached to documents and cancelled as proof of payment when taxes, import duties or other legal fees were paid. These were typically large payments and so the stamps have correspondingly high face values. From 1882 these stamps could also be sold by the post office to cover postage costs. These postal cancellations are rare because very few parcels cost such large amounts to send around the country - this is why they are worth considerably more than fiscal cancellations. Fiscally cancelled stamps do have value however and people do collect them.