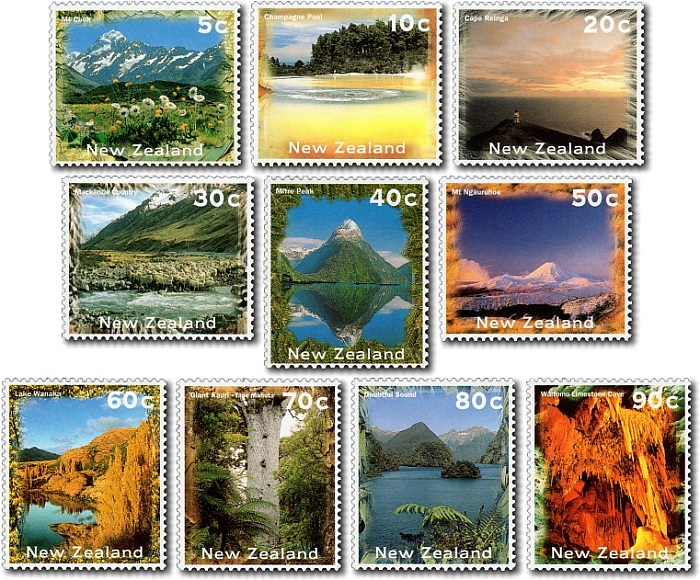 This sheetlet of ten 40c stamps was produced to commemorate Southpex '96 which was held in Invercargill on the 15th to 17th of March. The stamps from this sheetlet are the only source of the Perf 12 variety. This sheetlet is listed under 1996 Southpex Exhibition.

The 40 cent stamp was printed five times (not including the 1996 Southpex Exhibition issue) between 1995 and 2003 and each printing has colour variances, some of which are subtle. Each printing has an incrementing number of Kiwis printed on the selvedge which is the primary method of identification if you have the full sheet.

If you don't, first check the perforations and separate out the Perf 12 1996 Southpex Exhibition stamps (408e4 - bottom middle in the photo above) from the remainder which are all Perf 13½ x 13¾.

Then separate out all stamps with slightly pink coloured clouds and snow. These are all 408e2 - they are from the 2 Kiwi printing in 2002 (top middle above).

Next separate out the original issue (no kiwi) stamps which have a lighter bright blue sky and greener frame (408e1 - top left above).

The Postage Stamps of New Zealand Volume X
Edited by B.G. Vincent FRPSNZ
Published 2013 by The Royal Philatelic Society of New Zealand Incorporated (ISBN 978-0-9876534-3-7)
Pages 23 - 25
If you have any questions or comments please contact us - we'd love to hear from you.