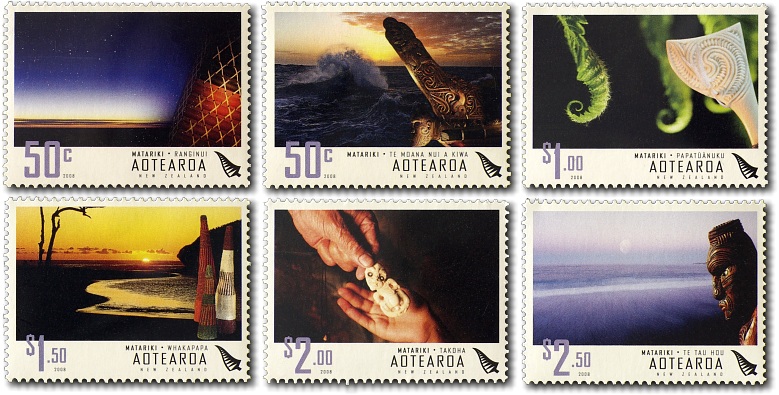 In the Maori language Matariki is the name of the Pleiades star cluster, which was important for agriculture in establishing the correct time to plant crops. The constellation is also believed to have been used by navigators.

The first rising of the Pleiades and of Rigel (Puanga in Maori) occurs just prior to sunrise in late May or early June, and this indicates that the old year has ended and the new year has begun.

The actual time for celebrating Matariki varies depending on the iwi (tribe). It has become common practice for various private and public institutions to celebrate Matariki over the period of a week or month anywhere from early June to late July.

In traditional times, Matariki was a season to celebrate and to prepare the ground for the coming year. It was also a good time to instruct young people in the lore of the land and the forest. 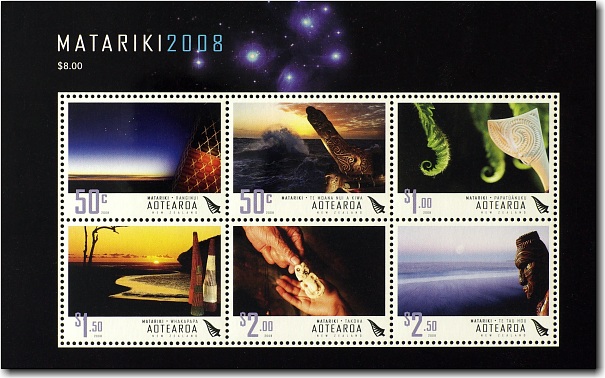 The 2008 WIPA08 - Vienna International Postage Stamp Exhibition miniature sheet also contained three stamps from this issue.
If you have any questions or comments please contact us - we'd love to hear from you.
Catalogue · 2007 · 2008 · 2009 · Matariki
Order Form · Currency Converter
Privacy Policy · What to Expect
Contact Us · Links