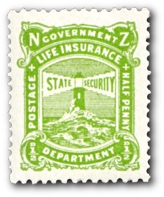 Early colonial life in New Zealand was risky. Shipwrecks and fires at sea were common and the predominantly wooden early colonial towns often caught fire. Accidents and deaths in the workplace were common so there was considerable demand for life insurance.

The early private life insurance companies were mutual funds which were owned by their policy-holders. They usually sold whole-of-life policies, with the sum assured paid out on the death of the insured person. Selling life insurance was both fiercely competitive and highly prejudicial with agents charging more to insure Maoris, Chinese or 'other men of colour'. Special conditions also applied to persons connected in any way with the manufacture or sale of intoxicating liquors.

Many could not afford the high premiums and the financial stability of the early insurance companies could not be guaranteed. So in 1869 the New Zealand Government Life Insurance department was formed to offer low-cost life insurance to gold miners with policies guaranteed by the New Zealand Government. The business grew rapidly and by 1877 Government Life was larger than the combined total of its competitors.

In common with other Government departments, the life insurance department enjoyed franking privileges, paying an annual amount to the Post and Telegraph Department to cover the cost of postage on its correspondence. However there was a dispute between the two departments regarding the calculation of postage costs. The matter was referred to arbitration but the Insurance Department insisted on paying future postage costs by the purchase of postage stamps. In 1890 the New Zealand Government authorised a special set of stamps to be produced for use by the New Zealand Government Life Insurance Department. The 1891 stamps were designed by the Secretary of the New Zealand Government Life Insurance Department (Mr W. B. Hudson) in consultation with Mr J. F. Rogers of the Government Printing Office. He chose the Eddystone Lighthouse from Plymouth, England(*) which had recently been rebuilt as the departments symbol for strength and security under adverse conditions. This was the first postal stamp in the world to feature a lighthouse.

(*) Whilst there is no official record that the stamp design is of the Eddystone Lighthouse, when the stamps were redesigned in 1947 by Mr James Berry (1947 New Zealand Government Life Insurance Lighthouses), the then Government Commissioner, Mr J. W. Macdonald, asked for one of the stamps to represent Eddystone because it was so well-known and was used by the office as a symbol of strength and security. The 3d Eddystone Lighthouse stamp from that issue is the only stamp with twin rays of light which mirror the design of the original stamps while none of the other lighthouses are lit.

This quote is from the Government Life Insurance Department's booklet for the 1947 issue:

"When the department was founded in 1869, financial storms had proved too much for many Life Assurance offices and New Zealand statesmen felt that "what was required was an impregnable foundation and an immovable structure that for all time would send out a message of hope to those distressed by the storms of adversity". Hence the selection of the lighthouse as the Department's symbol."

"An intriguing feature of the designs was the inclusion of Great Britain's Eddystone lighthouse, on the 3d value. Berry was originally instructed to submit six designs, and the then Government Commissioner, Mr J. W. Macdonald, specifically asked for one of these to represent Eddystone because it was so well-known and was used by the office as a symbol of strength and security."

"The original design of Government Life's first stamp was drawn by departmental secretary W. B. Hudson. For a motif he decided on a symbolic lighthouse and may have been inspired by the best-known of all such structures, the Eddystone Light on the Cornish Coast near Plymouth, England. It had been completed only eight years earlier, at a time when New Zealand was beginning to weather the effects of a lengthy economic downturn. Eddystone stood on a solid foundation which could resist waves raised by the fiercest of gales and so was an eminently suitable symbol for insurance purposes. It represented an immovable structure and, extending the metaphor, sent out a message of hope to those battered by the storms of economic uncertainty."